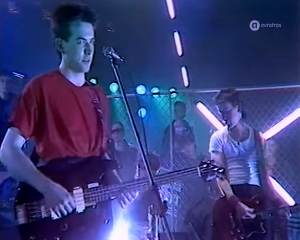 Until mid 1980 The Cure had only enjoyed some ‘underground’ TV coverage in the Netherlands. Alternative youth magazine NEON had showed live footage from New Pop ’79 in Rotterdam and a bit of the concert at the Melkweg in Amsterdam in December of the same year. In April 1980 The Cure made their  first Top of the Pops appearance. Maybe this would sort of set the tone for their future music chart TV performances. Slightly bored, not trying too hard to playback in sync and make a bit of a joke out of it. This definitely applies to The Cure’s Dutch music chart TV debut, A Forest at the TROS Top 50 show.

The TROS Top 50 was the hit parade from broadcasting association TROS between 1978-1985. Every Thursday it was on the radio and every two weeks there was also a TV show. I think the latter only during summer when Toppop (the most popular music TV show at the time) was on leave. Because of the pillarisation in the Netherlands you had several charts and broadcasts, which can be confusing. Anyway, probably at the beginning of July 1980 The Cure flew in to do a mime performance of A Forest at the TV studios in Hilversum, just before the single got its Dutch release. Maybe that’s why they used the album version as playback tape. Today, exactly 39 years after it was broadcasted, that historical performance has been published again on YouTube. It was already online, but not yet in this very good quality, which makes it quite special. Watch it here!

Update April 2020: here’s a full version (uploaded October 2019, quality not as good as on the TopPop account, but nice to see the full performance).