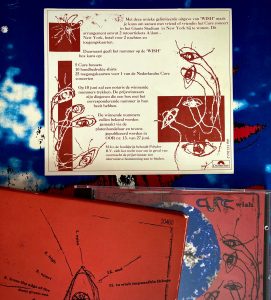 The Cure just announced a deluxe reissue of their ninth studio album Wish in celebration of its 30th anniversary. The initial Dutch cd edition, released in April 1992, came in a numbered cardboard slipcase. It contained an insert about a contest from the Dutch branch of The Cure’s record company Polydor. With the number of your copy, you could win a trip for two to New York to attend The Cure’s concert at the Giants Stadium, flight and hotel included. You could also win other prizes, such as box sets, hand-printed shirts and tickets for one of The Cure’s upcoming shows in the Netherlands. 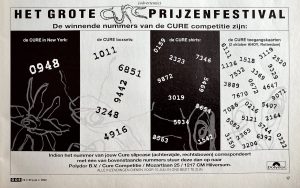 In June 1992 Polydor placed an ad in music magazine OOR with the winning numbers. Noteworthy is that The Cure would not play at the Giants Stadium at all that year. They had opened the North American leg of their Prayer Tour there in 1989. So maybe that venue was originally scheduled for the Wish Tour as well. But in 1992 The Cure ended up playing two shows at another venue in New York, the Nassau Coliseum in Uniondale. One show was at the beginning of the American tour in May and another one at the end in July. The insert mentioned that the record company reserved the right to offer an alternative destination. I wonder if the winner eventually went to the Nassau Coliseum in July (by the way, I didn’t win anything ;).