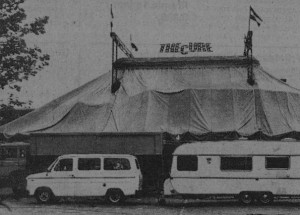 Probably the most exceptional tour The Cure did in the Netherlands, if not ever, is the Circus Tour 1981. Exclusively for the Dutch leg of the Picture Tour promoting the Faith album, The Cure chose a radical alternative to clubs or other concert venues. The band travelled zig-zag through the Netherlands performing their show under a circus tent with a capacity of about 2.000 people. During ten days the tent was being broken down after each gig, driven by trucks to the next town at night and then built up again to be in time for the show the following evening. There has been quite some (local) media attention for this short tour. I thought it would be nice to gather this information to create a sort of tour diary. Below is an attempt to do this. Of course I’m happy to add things if you have more stories, memories, pictures, clippings, anything to share…
END_OF_DOCUMENT_TOKEN_TO_BE_REPLACED