A bit late, but still before the end of the year and also of the decade, so I thought to be just in time for a look back at the final Cure gig of the 2010s in the Netherlands. Actually, it would be the last of only three Dutch shows in the past 10 years!

END_OF_DOCUMENT_TOKEN_TO_BE_REPLACED 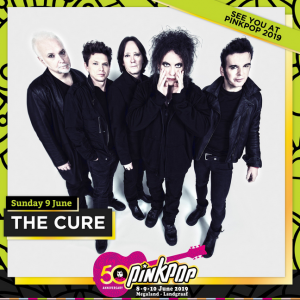 At their annual press conference, last Wednesday at the Paradiso in Amsterdam, Pinkpop announced The Cure as one of the headliners of the three-day oldest festival in the Netherlands. Though initially everything seemed to indicate that the band would play there this year, I guess it still came as a bit of a suprise.

Last year there were strong rumours that The Cure would be part of the 50th (!) anniversary line-up. I always thought they should be. If only because of their legendary 1986 headline slot, which ‘saved’ the festival according to many. But when, in September 2018, The Cure announced a gig in Dublin in the same (Whitsun) weekend as Pinkpop, it suddenly became less likely. In November 2018 Pinkpop even explicitly denied all rumours. But apparently and luckily Pinkpop and the band still found a way to make it happen.

The Cure will play on Sunday 9 June. This will be their third Pinkpop performance. The others being at the 1986 and 2012 editions (the latter was Bowie guitarist Reeves Gabrels’s debut gig with the band).

As this decade comes to an end, I realise that The Cure (will) have only played three Dutch gigs during the 2010s, strangely enough two of which at Pinkpop. It shows how rare it has become to see the band play live in the Netherlands these days.