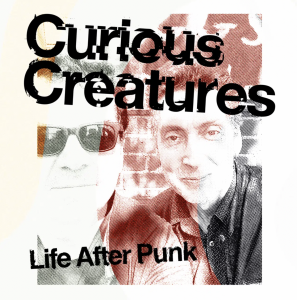 Just in case you missed it, or forgot about it along the way, this is to draw attention once more to one of the most enjoyable podcasts of the moment: Curious Creatures. It is hosted by two post-punk icons, Lol Tolhurst and Budgie. Lol is of course co-founder and former member of The Cure. He started on drums and later switched to keyboards. Budgie is best known as the fantastic drummer of Siouxsie & the Banshees. He also formed a side-project with Siouxsie called The Creatures. After many years, the two found each other again. They are now working on several projects, one of which is this podcast. If you are a fan of these bands, and of course you are, this is a podcast for you. Also when you are a drummer, like me, you will enjoy it for sure.

Generally, the podcast offers pleasant chats between Lol and Budgie and often a guest. They talk about subjects as music, subculture and life in general. The guest can be a contemporary, but also someone from a completely different era or background. Lol and Budgie have a good chemistry and talent for telling amusing anecdotes, that give further insight into the history of the bands they were in and themselves as persons.

If you are into the early history of The Cure, the episode about the band’s debut album Three Imaginary Boys is very interesting. In the same vein, the episode about the Banshees’ ground-breaking 1981 album Juju is great. In these episodes Lol and Budgie elaborate on the recording of those respective albums. For both Cure and Banshees fans, the episode featuring original Cure bass player Michael Dempsey should not be missed. In this episode, among other things, you will find out more about that infamous Join Hands Tour, where The Cure supported the Banshees in 1979.

There are even some Dutch references here and there. In the episode ‘Curious Cuisine‘, Lol tells a story about a strange, exotic drink he once got in a club in Amsterdam. I will not reveal any more about it here…