The concert was on a Saturday, so we went early on the day by train to Heerenveen. First we went into the village for a couple of drinks. Heerenveen is rather small. Only about 25.000 people lived there. The place was invaded by thousands of Cure fans, all dressed in black, occupying the few terraces of the village centre. A newspaper quoted a local saying ‘Is this a pop festival? It looks like a funeral!’ 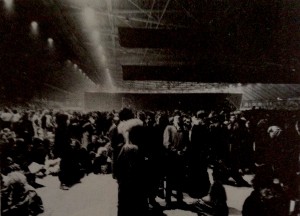 Around 4 o’clock or so we went to the venue. I remember walking across the big parking place and hearing One Hundred Years blasting from someone’s car audio system, while people around were dancing.
Then we went inside the Thialf stadium. It was a huge hall. The organization had draped large black curtains from the ceiling to prevent sound bouncing back. Between the several Robert Smith look-alikes I also spotted some Mission fans, wearing long black capes, sunglasses and hats. 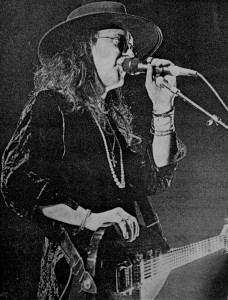 When the lights went out for the first act, it was total darkness. The beer stands used candles to help people ordering drinks. Apparently no lights were allowed. Shelleyan Orphan kicked off the night, but they were not given a very good reception by all of the audience. Maybe they were a bit nervous as well, having to perform their sensitive folky songs in front of such a huge crowd that obviously didn’t know them yet. Later that summer I saw them again and they seemed more confident. I realised how their fairy-like tunes and the beautiful voice of singer Caroline Crawley set the right atmosphere for The Cure’s new material.

The Mission were welcomed more warmly. The weeks before the concert I had played their most recent album Children on my walkman (cassette) on repeat, so it was nice that they opened with Beyond The Pale. The sound was loud already and those guys were kind of rough on stage, playing with their boots on the monitors, smoking and drinking red wine from bottles. The previous year The Mission had a Top 40 hit in the Netherlands with Tower of Strength, which they performed in a beautiful, incantatory version. 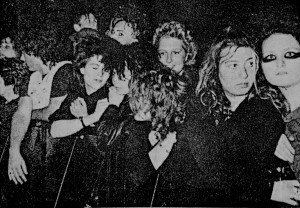 Then the waiting for The Cure began. By that time we had moved pretty close to the front of the stage, to find out we were not the only ones. More and more people in that big Thialf arena began to push forward. The area in front of the stage looked like cornfields in the wind. Some guy from the organization came up on stage and asked everybody to take one step back, but that didn’t help very much. I remember Perry, who was still a Cure roadie at the time, having a chat with some people who were suffering down the front. 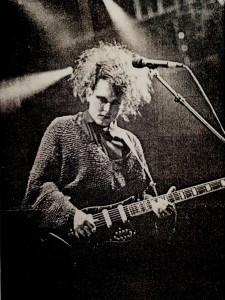 The lights went out again and the chimes introducing Plainsong sounded, responded by massive cheers from the audience. The Cure came on stage in the dark under twinkling blue lights. Robert said ‘hello’ and the band started Plainsong, which sounded very impressive through those big walls of speakers on either side of the stage. It was great to hear Simon playing the ‘solo’ bit of that song on his bass. In the meantime we were also busy keeping ourselves on our feet, because the pushing continued. We saw several people in the first rows faint and being carried away. Later I read that the Dutch newspaper De Volkskrant compared the situation to the terrible Hillsborough (Sheffield) disaster the month before, which is probably not very appropriate. But it was still sort of dangerous. So, after a couple of songs we decided to get the hell out of there and move a bit to the back.

About halfway The Cure’s set I had lost my friends in the crowd. The rest of the concert I wandered around alone in that huge hall, catching the show from various angles, enjoying all those new Disintegration songs and the stunning light show. And of course lots and lots of smoke and that beautiful Prayer Tour backdrop, gently being waved by wind blowers. The audience was really into it and especially during A Forest people went wild. Some expressed their enthusiasm by lighting bangers. 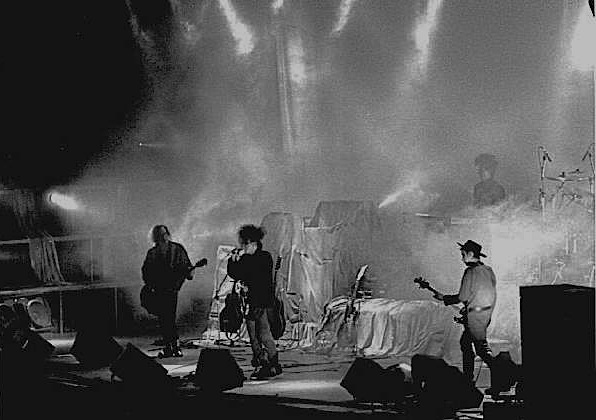 Robert was pretty talkative that night. Announcing Cold he said this would put it to the test, where we come from, how old we are. ‘People down the front I could have carried around in my arms’. Before the second encore, Robert said that the next song would test the audience’s loyalty. Apparently they had been requested to play Give Me It, but that would be ‘too little’ to do in such a big place. So instead they had chosen The Figurehead, according to Robert ‘much better, I’m sure’. That was a great extended version with extra lyrics, which also found its way to the bootlegs (it’s on Parched Corn as a bonus track). Robert dedicated Untitled to The Mission and Faith to Shelleyan Orphan (‘this is for my orphan, and also for Shelleyan Orphan’). For the first time on the Prayer Tour, Faith was played as the last song of the final encore, making the end of the show even more intense.

A bit knock out from what I had just witnessed, I bumped into my friends on my way to the exit. We tried to catch a train back, but there were too many Cure fans for too few wagons. After a long wait the Dutch railways finally came up with some extra trains. I think we were among the last leaving Heerenveen, looking like a quiet and pieceful provincial village again, as if nothing had happened…

Here is Marco’s story (in Dutch) who met the band before the show. 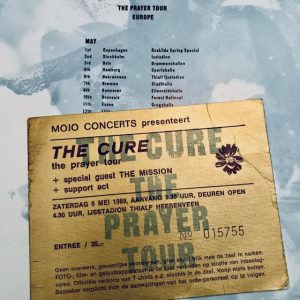 Plainsong, Pictures Of You, Closedown, Kyoto Song, A Night Like This, Just Like Heaven, Last Dance, Fascination Street, Cold, Charlotte Sometimes, The Walk, A Forest, Inbetween Days, The Same Deep Water As You, Prayers For Rain, Disintegration

Encore 1: Lullaby, Close To Me, Let’s Go To Bed, Why Can’t I Be You?
Encore 2: The Figurehead, Boys Don’t Cry
Encore 3: Homesick, Untitled, Faith

Update May 2021: recently Bear With No Face shared the full video of the show with the audio synced from one of the audience tape versions, great job!