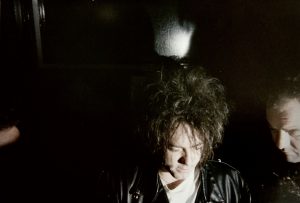 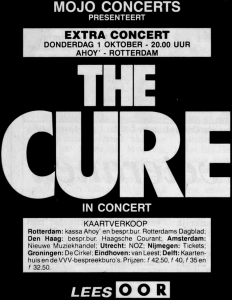 Initially, only one Dutch concert was scheduled in Rotterdam. In June 1992, newspapers announced that The Cure would be playing at the Ahoy’ Sportpaleis again on Friday October 2nd.

Apparently, it sold out, because a couple of months later a second show was announced at the same venue on Thursday October 1st. I guess because the concert in Gent (Belgium) on October 3rd was already booked. So, the ‘second date’, on which the band often played more exclusive songs, would be one day earlier. A great opportunity to see the band twice in a row, so me and some friends did just that.

The first day we arrived at the Ahoy’ site already in the afternoon. We were hanging around a bit and at some point, guitarist and keyboard player Perry Bamonte came out, chatted with us for a short while, and then went for a bike ride.

When the doors of the Ahoy’ opened, we ran towards the front. Some heavenly music was playing through the sound system. I can’t recall what it was. Maybe Cocteau Twins (again)? Crammed into the front rows we had our first glance at the Wish stage set. A sort of sunken Greek temple with pillars covered in canvas, strange fantasy ornaments and a flapping backdrop to be used for projections. 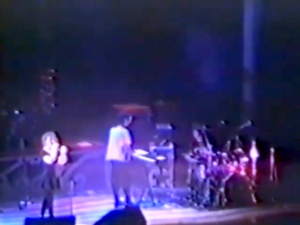 Cranes from Portsmouth UK were support act for almost the entire Wish Tour, starting on the American leg. They had already gained some popularity in alternative circles, also thanks to MTV’s 120 Minutes.

Before they came on stage, breathtakingly beautiful intro music resounded through that big Ahoy’ hall. A cinematic neo-classical piece with harp and cello. They started their short set with the wonderful piano notes of Far Away, which will forever remind me of the Wish Tour. This song was not yet released at the time. After some songs from their most recent album Wings of Joy, Cranes played another unreleased song, Adrift. This would become an indie dance hit with heavy, almost industrial outbursts.

The Cure also used intro music to set the mood. An unreleased dreamy instrumental called Tape, which I already knew thanks to the London Kilburn National Ballroom recording from May, that was circulating that summer.  During the last notes of Tape, the band came on stage and Robert Smith and Simon Gallup started playing along an intro that would evolve into the Wish opening song Open. It was accompanied by a dazzling psychedelic light show. Lots of flickering strobes and rotating light beams, maybe inspired by shoegaze bands that were hip back then (Curve, Lush, Slowdive etc.).

The opening songs were quite the standard Wish set. After Fascination Street, the first surprise came. One Hundred Years, not played that year so far. The band had tried it during the soundcheck, but Robert still struggled a bit with the lyrics. Another great surprise followed, At Night. Also a first on this tour. The next song A Letter To Elise would be released as the third single off the Wish album that weekend and was debuted on European soil that night. So far, so good as for the rarities on the ‘second date’.

But then something followed that isn’t quite my favourite: The Cure’s Chic inspired disco banger Hot Hot Hot!!!. I didn’t understand how they came to play this after the previous ones. It didn’t fit in with the atmosphere I thought. Another melancholic live rarity, To Wish Impossible Things, also rehearsed during the soundcheck, would have suited much better, I think. Anyway, it was nice that Robert played a snippet from It’s Not You on his acoustic guitar as an intro to Inbetween Days, to loud cheers from the audience. So, still good vibes after all. 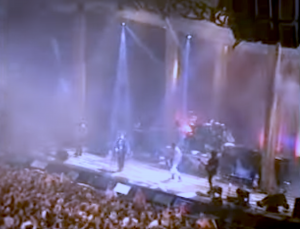 The second night was the first announced sold-out show, and you could kind of tell from the excitement in the room. The main set was quite standard. I’m more into atmospheric Cure with lots of keyboards, so the three guitars on the Wish Tour material sometimes were a little much for me. Especially during noisy songs like Never Enough and Cut it became a bit of a cacaphony. But I was very happy to hear a beautiful rendition of Apart. Besides, I thought the encores were better than on the first night (Charlotte Sometimes, A Strange Day).

A bit weird was that the big hall lights of the Ahoy’ were regularly turned on fully. Suddenly you would see red and sweaty faces all around you as if you were stuck in a sports match in broad daylight. I think I read somewhere that The Cure’s intention was to film audiences for using it on an upcoming concert film (Show?). However, I don’t think any of possible Rotterdam footage was used for that purpose. There are some audience videos on YouTube where you can see this effect, see links below for Primary and Boys Don’t Cry. 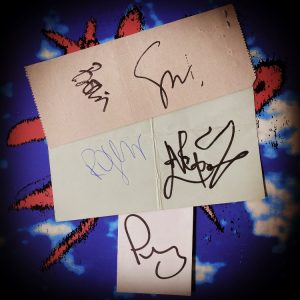 After the gig, we came up with the idea of trying to meet the band. So, we went to the artist exit of the Ahoy’. I think we waited for hours. At least in my memory it took ages.

Finally, the band came out to enter the tour bus. It was not the era of selfies yet. The thing you did back then was ask for autographs. Funny rituals if you think about it. Anyway, the band were very kind and relaxed and took all the time for everyone who was still around.

As often, the Dutch press wasn’t universally positive about The Cure’s two concerts in Rotterdam that year.

Jerry Goossens reviewed the first night and wrote for Het Parool: “The music was leaden, monotonous and depressing most of the time. Songs without dynamics or build-up that came to a painstaking halt like slow behemoths. Now, Robert Smith has never been much of a party animal. He is able to make the opening theme of Sesame Street sound like Mozart’s Requiem. You would want to shout at him: ‘come on young man, put on your swimming trunks and find the sun!’“. I would take that bit about Sesame Street as a compliment, LF. 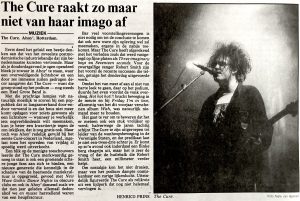 De Volkskrant wasn’t much more enthusiastic. Henrico Prins’ review was mostly negative, but he also noticed something remarkable that would later prove him right: “A glance at the crowd learned that the band are curiously able to attract a growing base of young fans. A new generation that has apparently grown up in the shadow of mainstream music culture, nurtured by New Wave Gothic Dance Nights in obscure clubs and dancing like we all did a decade ago: as if we were en masse recovering from a hip fracture. Not much imagination is needed to come to the conclusion that new wave will also experience its revival, sometime in the near future“.

Another big newspaper NRC had a double take. Hester Carvalho wrote about the second night: “Surprising was the beautiful stage set designed for the Wish Tour. The open construction of fabric pillars and whimsical copper stalactites was beautifully lit with icy blue, and on the backdrop, loose strips of fabric fanned sensually like sea anemones. But this could not compensate for the intense dullness and suffocating bombast of the musical section“. 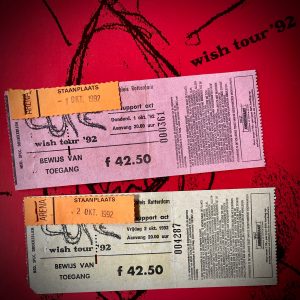 Intro: Tape, Open, High, Pictures Of You, Lullaby, Just Like Heaven, Fascination Street, One Hundred Years, At Night, A Letter To Elise, Hot Hot Hot!!!, Let’s Go To Bed, Friday I’m In Love, Inbetween Days, From The Edge Of The Deep Green Sea, Never Enough, Cut, End
Encore 1: Close To Me, Why Can’t I Be You?
Encore 2: Three Imaginary Boys, Boys Don’t Cry
Encore 3: A Forest

YouTube link to audience video of the full show.

Intro: Tape, Open, High, Pictures Of You, Lullaby, Just Like Heaven, Fascination Street, A Night Like This, Apart, Doing The Unstuck, The Walk, Let’s Go To Bed, Friday I’m In Love, Inbetween Days, From The Edge Of The Deep Green Sea, Never Enough, Cut, End
Encore 1: Lovesong, Why Can’t I Be You?
Encore 2: Charlotte Sometimes, Primary, Boys Don’t Cry
Encore 3: A Strange Day, A Forest

Robert picture in front of the tour bus by Leontien, many thanks!