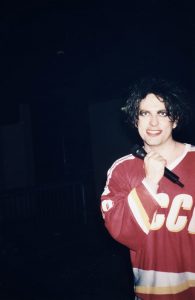 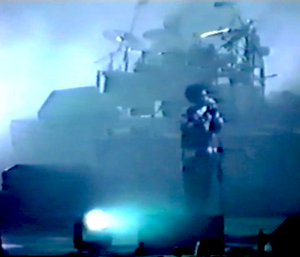 The expensive ‘abandoned funfair’ stage design with the broken roller coaster used on some spring dates and in North America was stripped down for the European leg. Still, the band took a spectacular light show on the road.

That was immediately visible during the opener Plainsong with lots of backlight, strobos and – obviously – smoke. There was a screen for projections and for the older songs they used draped curtains, moved by windmachines. The drum riser and amplifiers were painted in bright red, yellow and blue. 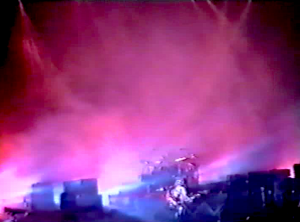 Only after the third song Club America, Robert Smith greeted the audience with ‘thank you and hello’. It would be a long main set consisting of 25 songs, featuring a lot of new material off the Wild Mood Swings album (12 out of the 14 album tracks), varied with singles and live favourites from the four previous studio albums.

The band played quite tight, with just a few minor mistakes. Drummer Jason went on a little too long on Plainsong and stopped too soon on Lullaby. But even Robert’s guitar solo on Mint Car went well. Looking back, we now know that many of the Wild Mood Swings songs would never be played live again. So, for that reason alone, a memorable concert. 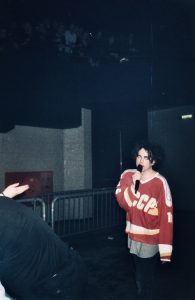 As the set progressed, the crowd started to move. But things really went wild in the encores. During the upcoming single Gone, Robert stole the show with his funny dancing.

He took things further on Let’s Go To Bed and especially Why Can’t I Be You?, where Robert went up to the drum kit and hit Jason’s cymbals a couple of times at the beginning of the song. He then climbed down the side of the stage and sang to the front rows pressed against the barriers on ground level. Security had a challenge in keeping the frenzied fans under control. But above all, everyone had a big smile on their faces.

The Cure saved the biggest surprise of the evening for the third and final encore. Of course they still had to play A Forest. During the classic outro, as usual the crowd clapped along with Simon Gallup’s most famous bass notes, but it probably took a while until people realised they were also clapping along to Robert who was playing the opening chords of improvisation song Forever. That was a loud, noisy and hypnotic 7 minute version, with Robert desperately screaming something like ‘only you… can change’…

Before leaving the stage, having played 36 songs in three hours, Robert said ‘thank you for making our first night in Europe fucking excellent’. 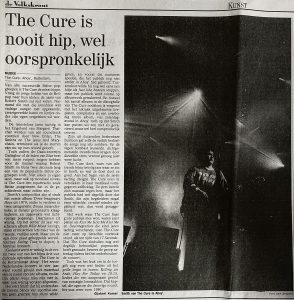 Along with the zeitgeist, not all of the press were enthusiastic about the return of this ‘goth icon’ to the Dutch stage. Saskia Bosch wrote a rather grumpy review of the gig for newspaper Trouw. She thought the so-called mood swings of the band could be reduced to one overriding emotion: utter boredom.

Gijsbert Kramer was more respectful in De Volkskrant. He acknowledged The Cure were not hip anymore, but appreciated that they played songs the Dutch audience hadn’t heard before instead of a greatest hits show. For almost twenty years the band, averse to all trends, have been doing what they want. And what they do, they do well, he wrote.

Plainsong, Want, Club America, Fascination Street, Push, Lullaby, Pictures Of You, High, This Is A Lie, Catch, Mint Car, Just Like Heaven, Jupiter Crash, Round & Round & Round, Lovesong, Like Cockatoos, Strange Attraction, Return, Treasure, Trap, Prayers For Rain, Inbetween Days, From The Edge Of The Deep Green Sea, Bare, Disintegration
Encore 1: Dressing Up, Gone, Let’s Go To Bed, Why Can’t I Be You?
Encore 2: If Only Tonight We Could Sleep, Play For Today, Boys Don’t Cry, 10:15 Saturday Night, Killing An Arab
Encore 3: A Forest, Forever 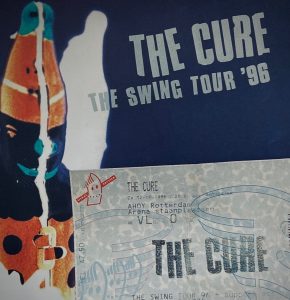 Here is the show info on cure-concerts.de with original paper setlist and poster.

Here is an audience recording (only audio).

Here is fan footage of the band arriving at and leaving from the Ahoy that night, very shaky indeed, strong stomach recommended.

Pics by M❤️
Many thanks to Fons for clippings, reviews and memories