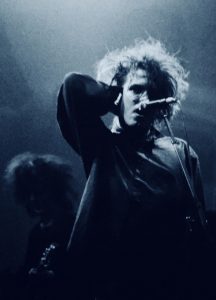 There was no doubt – I had to go there! I hadn’t been able to attend the Pinkpop festival the year before, because I was way too young. I was still young. But I was not going to miss The Cure another time. Actually, it would also be my first concert ever by any band… 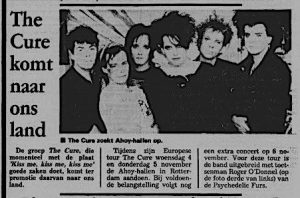 Buying tickets was quite a different operation in those days. I lived in a village. For these kinds of services you had to go to the local tourist information centre, early in the morning on the day the presale started. They would call the venue on behalf of you. In case they would get through, you would receive a ‘voucher’, which you had to exchange at the venue for admission tickets. Very complicated.

It appeared our local tourist centre was not particularly first in line. They were only able to get us seats at the upper galleries in the most far corner of the Ahoy’ Sportpaleis. But that didn’t matter. I had tickets! 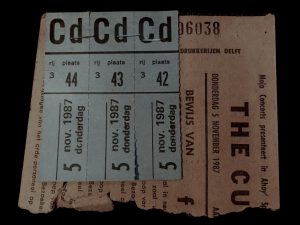 It was a long wait until November. Robert had said in an interview that they wouldn’t be playing in Europe until autumn, so people could get familiar with the many new songs on the Kiss Me double album.

Finally the day of the show came. I can’t remember exactly, but I guess I skipped school because I do remember we went to Rotterdam by train already early in the afternoon. This absolutely made no sense at all since we had reserved seats. But I was probably too excited to risk any delay.

From Rotterdam Central Station we went to Rotterdam Zuidplein by metro, at the southern bank of the Maas river, where the Ahoy’ Sportpaleis is situated. As we walked through the Zuidplein shopping mall I already spotted some cool looking new wavers with punky hair and long black overcoats.

At the time there was a footbridge to the entrances of the seating areas of the Ahoy’. When you crossed this bridge you could see the queue below for the entrance of the standing arena. I saw some exciting things I hadn’t seen before. People using various kinds of substances. Some of them appearing not very well…

It was a cold day, so we were glad when the doors finally opened. We walked past a merchandise stand. I bought the Kissing Tour book, of course cherished to this day.

When we arrived at our seats I heard some familiar accents around me. It appeared as if all locals who had ordered tickets through our tourist information centre had been allocated to the same block! So it kind of felt like The Cure were playing in our hometown.

The advantage of our far away seats was that we had a bird’s eye perspective over the venue. A bit strange was the cycling track, which was still present in the Ahoy’ at the time, creating a rather big distance between the arena and the galleries. It looked like the stage was built in the middle of the arena. But that just appeared so because there was a big white screen covering the entire front of the stage. A bunch of hardcore fans were already pressed against the front barriers.

There was no support act. Just music playing over the PA. I remember hearing Cocteau Twins. I think it was Millimillenary. Maybe they played the entire Pink Opaque compilation? 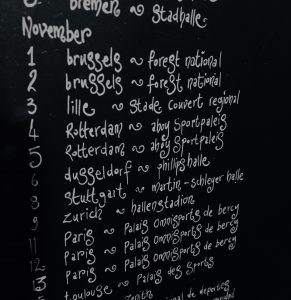 The lights went out. Great cheers of the crowd. Dark, rumbling sounds emerged from the massive speakers hanging from the roof of the venue. On the cinema screen in front of the stage huge close-ups of Robert Smith’s lips, mouth and eyes appeared. Some incomprehensible spoken words resounded. Meanwhile you couldn’t see what was going on behind the screen on stage. In my memory this psychedelic opening film lasted forever. But from live recordings I know it was only five minutes or so. The music swelled, the cheering got louder, tension rose and suddenly – flash! The screen popped away and there they were – The Cure on stage, kicking off with The Kiss. Every gig-goer knows the sensation of the start of a live show. I guess your first gig ever feels like ten times this sensation. And boy what was it f***ing loud!

Immediately after The Kiss the band launched into Torture. After that Robert made his introduction to the crowd, of course in his typical unintelligible mumbling style. Not a clue what he was saying. Next up was A Strange Day, a favourite. Back then I was totally unaware if any particular song on the setlist was unusual. It was the pre-internet age. You didn’t know what they had played the night before. It turned out we got quite some different songs compared to the regular setlist played on the Kissing Tour. The second night in Rotterdam was similar to the second Brussels and Paris dates. But of course I only found out months later. Besides A Strange Day, they played Other Voices, The Blood, One Hundred Years (powerful version) and some other surprises in the encores, omitting a bunch of Kiss Me songs. Also, in contrast to the white Kissing Tour shirts, all of The Cure wore black. 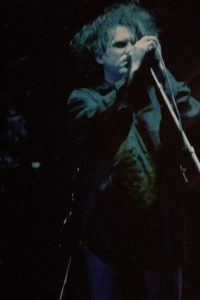 I remember during the first half of If Only Tonight We Could Sleep Robert did his funny walk across the stage, which he would later always do at the beginning of Plainsong. The Snakepit was quite a mind-blowing experience. The stage was shrouded in fog and only a couple of blue light beams circled around the venue like lighthouses in the mist. As visual support for other new songs they used colourful projections in Kiss Me-style on the three vertical screens behind the stage. A Forest was the longest version I heard so far (over 13 minutes) with Robert playing a tune reminiscent of Love Will Tear Us Apart during his ‘solo’. Set-closer Fight was dedicated to ‘Alan (?), hope he gets home all right’.

The Cure walked off stage. Would they come back for an encore? Nowadays you would laugh at this question. Back then I really didn’t know. After a long break they finally returned. Boris started Close To Me, the first song of what would be the pop encore. This ended with that very long version of Why Can’t I Be You?, with Robert including bits of Frank Sinatra lyrics (from Fools Rush In and Witchcraft).

Before the second encore Robert mumbled something like ‘this one’s for particularly… I don’t even know their names but… they know it from outside’, and then announced The Drowning Man. Wow! Beautiful version. More great 1981 material was to follow: Charlotte Sometimes. Obviously Robert was suffering from the volume as well. ‘This is much too sharp, it’s really really hard and hurts my ears’. After these two songs I thought I heard Robert announcing ‘Fight’. Huh, again? Apparently I was confused by his accent because it turned out to be Faith! Also a beautiful extended version with extra lyrics. Once more Robert made references to Joy Division by playing bits of The Eternal on his six-string bass. Halfway through this very emotional song one local sitting in front of me turned to me and screamed: ‘hey mate, cheer up!’ Apparently I wasn’t looking very happy. I think he completely missed the point 😉

Of course Boys Don’t Cry still had to be played, so The Cure returned for a third and final encore. After the grand finale 10:15 and Killing an Arab, Robert kept playing chords that evolved into the improvised song Forever. One of the three times The Cure played it in 1987. Tonight’s version was intense. Robert sang some lines from the famous Paris ’84 version: ‘we could dance, or talk it over’. It was the perfect apotheosis of a memorable night.

The lights went on again. I remember I couldn’t see the opposite side of the Ahoy’! There was still dry ice left from the concert, but it was also in the days that you could smoke inside concert halls. Outside the Ahoy’ I picked up a flyer from some guy who had recorded the gig. It would be the start of my Cure live addiction.

The Kiss, Torture, A Strange Day, Catch, Just Like Heaven, Other Voices, The Blood, If Only Tonight We Could Sleep, Like Cockatoos, The Walk, Inbetween Days, The Perfect Girl, One Hundred Years, The Snakepit, A Forest, Fight
Encore 1: Close To Me, Let’s Go To Bed, Why Can’t I Be You?
Encore 2: The Drowning Man, Charlotte Sometimes, Faith
Encore 3: Boys Don’t Cry, 10:15 Saturday Night, Killing An Arab, Forever

YouTube links (audio only):
The Drowning Man (check out the interesting comment below the video!)
Selection (about one hour with the more rare songs/versions of this set)

It would be the last Cure show with Lol in the Netherlands (so far!)

As far as I know there only exists one review of this particular gig. NRC Handelsblad published an article entitled ‘Balanced art-rock by matured Cure’, which came with a picture from the first night (Robert in a white shirt). The tone of the review was positive. The journalist used some flowery language to describe The Cure’s music: ‘(…) the slower, strong psychedelic pieces have a pronounced sensual atmosphere. They are hallucinogenic sound structures of reverbing guitars and a maelstrom of whirling orchestrations’…

Many thanks to Frank for the live pictures!