At the time, the Pinkpop festival was in financial problems. The previous editions of 1984 and 1985 were poorly attended. Pinkpop had to compete with their much bigger and richer Belgian counterpart Torhout/Werchter.

When Pinkpop got the opportunity to book The Cure as headliner for its 17th edition, positive vibes came back. However, The Cure had two conditions: Pinkpop had to build a bigger stage for them and the curfew had to be later. Pinkpop agreed. The rest of the line-up was selected to hopefully also please the Cure audience, with bands such as The Waterboys and The Cult. Since years all 48.000 tickets sold out in advance. On top of it all, 19 May 1986 was a beautiful, sunny day. 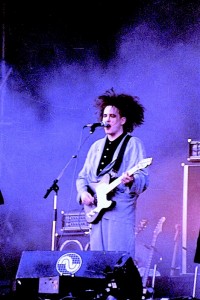 The Cure played a powerful set combining darker, older songs such as Other Voices and A Strange Day with The Head On The Door-repertoire. Of course the current hit Boys Don’t Cry was played (as an encore). A beautiful 9-minute version of Faith closed the set. During the last tones, fireworks were launched in the air.

Apparently The Cure themselves also very much enjoyed playing at this festival. At the beginning of the show Robert said ‘It’s so gorgeous to be here’. Later The Cure referred in their (then paper) newsletter to the Pinkpop festival as being ‘fab’.

Countdown, the weekly pop music show from the Veronica broadcasting company, showed some reports of the festival. One report includes bits from the opener Shake Dog Shake and interviews with Robert Smith at the side of a swimming pool and with the rest of the band backstage.

Some artists of Pinkpop 1986 have been broadcasted on national radio, like Claw Boys Claw. As far as I know, there does not exist any professional recording of The Cure’s Pinkpop ’86 performance or it has never resurfaced. Some audience recordings made their way to the tape trading circuit. 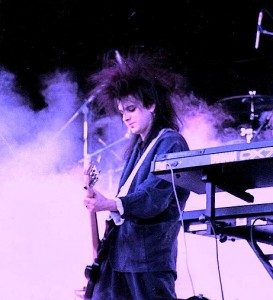 (Intro: The Glove – Relax), Shake Dog Shake, Play For Today, Kyoto Song, Other Voices, Primary, A Strange Day, Inbetween Days, The Walk, A Night Like This, Push, One Hundred Years, A Forest, Sinking,

Note: some sites mention the last songs divided in two instead of three encores. If you were there and you remember how it was, please let me know.